Bayer Diagnostics offers tools to detect and manage kidney disease at the point of care
The promise of point of care testing is to provide information quickly enough to allow clinicians to develop therapeutic strategies while a patient is still being seen at a visit. Despite the appeal of near patient testing and early diagnosis, it is often difficult to determine the impact of technology on patient outcomes and the subsequent downstream savings. Recently, clinicians have been introduced to new tools to allow them to determine albumin-to-creatinine or protein-to-creatine ratios at the point of care. The use of these assays to detect kidney disease in early stages helps physicians to initiate treatments that delay progression to kidney failure, and may become a model for how early disease detection at the point of care can impact both the health of patients and future costs associated with delayed treatment.

Kidney disease is becoming a major health problem. In the U.S., there is a rising incidence of kidney failure, morbidity and mortality, as well as higher costs associated with treating the disease. According to the National Kidney Foundation (NKF), one in nine people in the U.S. has chronic kidney disease (CKD), with estimates of nearly five percent of the population at risk for kidney disease. Currently, more than 370,000 patients in the U.S. are being treated with dialysis or kidney transplantation for kidney failure. Annually, an estimated 60,000 deaths occur from diseases related to kidney failure. End stage renal disease (ESRD) is also linked to several co-morbid conditions including cardiovascular disease.

Risk factors for kidney disease are impacted by both socioeconomic and clinical considerations. Chronic kidney disease impacts minority populations disproportionately. Statistics from 1998 reveal that renal failure rates per million were 3,831 for African Americans, 3,040 for Native Americans, and 817 for Caucasian Americans. Other risk factors include age greater than 60 years, diabetes and hypertension, family history of chronic kidney diseases, autoimmune disease, systemic infections, and exposure to certain prescription and non-prescription medications.

The leading cause of ESRD is diabetes, accounting for more than 45 percent of new cases annually. Diabetes is now the foremost cause of this disease in the U.S. and EU due in part to the fact that diabetes is increasing in frequency, and patients with diabetes are now being accepted into programs to treat ESRD. Hypertension is the second leading cause of ESRD, accounting for about 25 percent of new and existing cases in this country. Annually, glomerulonephritis and cystic disease are responsible for 12 and two percent of ESRD cases, respectively. Treatment includes dialysis, which costs about $50,000 per year and suffers poor outcomes and five-year survival rates of about 29 percent. Transplantation is another option, and includes a cost of about $46,000 for the first year post surgical intervention.

In recent years, a growing body of evidence indicates that early detection and treatment for kidney disease can prevent or even delay ESRD and cardiovascular co-morbidity. Unfortunately, chronic kidney disease is often under-diagnosed. In an effort to provide clinicians with a clear definition and classification of stages in CKD, the NKF recently released evidence-based practice guidelines for kidney disease diagnosis and management. Called the Kidney Disease Outcomes Quality Initiative (K/DOQI), these guidelines are an expansion of the NKF’s Dialysis Outcomes Quality Initiative, which has helped to improve the care of dialysis patients.

According to K/DOQI guidelines, a clinical diagnosis of CKD is made under one of two scenarios. The first includes the detection of kidney damage over a period of three months with or without decreased glomerular filtration rate (GFR), and the presence of pathologic abnormalities or markers of damage, including those found in blood or urine, or with imaging tests. The second scenario falls under a measurement of GFR less than 60 mL/min/1.73 m2, with or without kidney damage. GFR may be determined by measuring exogenous or endogenous markers. Currently, clinicians use either 24-hour urine collections to determine creatinine clearance, or estimate GFR based on several equations that take into account the patient’s serum creatinine concentration, age, weight, sex and ethnicity.

Low levels of protein and albumin in urine are also used as markers of generalized and chronic kidney disease. According to the NKF, even small amounts of urine protein are strong indicators of kidney disease and increased risk for cardiovascular morbidity within certain high-risk groups. Therefore, the recent practice guidelines recommend testing for proteinuria at regular intervals, depending on risk-group stratification. Spot urine samples, preferably first void, are recommended. Adults in at-risk groups may be tested for urine albumin with an albumin-specific reagent strip or an albumin-to-creatine ratio. For children, the guidelines recommend standard urine protein reagent strips or protein-to-creatine ratios. All positive results are to be confirmed with quantitative protein or albumin-to-creatinine ratios. The NKF also recommends that patients in certain categories undergo evaluation for the presence of RBCs, WBCs, urine pH and specific gravity, and that in some cases, imaging studies be performed to detect structural abnormalities.

Albumin is normally present in the urine at albumin-to-creatine ratio concentrations of less than 30 mg/g. In high-risk groups, ratios from 30 to 300 mg/g are indicative of developing nephropathy. Ratios of greater than 80mg/g demonstrate nephropathy in the general population, while clinical proteinuria is indicated by a protein-to-creatinine ratio of 300 mg/g or higher.

One of the biggest drawbacks to spot urine protein determination has been the variability of concentration over time: samples from the same patient could vary significantly based on urine concentration, resulting in the need to perform 24-hour urine collection. A number of recent studies have determined that the protein (or albumin)-to-creatinine ratio from a spot urine sample can be a more reliable and faster option.

Recognizing the need to adjust for urine concentration in these measurements, Bayer Diagnostics has developed a series of products that provide albumin or urinary protein-to-creatinine ratios for a variety of risk groups and diagnostic criteria. In February, 2002 Bayer launched Multistix Pro Reagent Strips, a new product that provides estimates of protein-to-creatinine ratios in a dip and read format. These CLIA-waived strips may be read visually or by using the Clinitek 50 analyzer with results in 60 seconds. With a specific albumin sensitivity range of eight to 15 mg/dL, these strips are designed to aid in the diagnosis of kidney disease in patients with one or more risk factors for kidney disease. For patients in higher risk groups, including those with diabetes, Bayer offers the Clinitek Microalbumin Reagent Strips, which provide a specific albumin sensitivity range of two to four mg/dL. These strips are also CLIA-waived when run on the Clinitek 50 analyzer, and provide estimates of albumin-to-creatinine ratios.

According to Bayer, this technology provides clinicians with an accurate and reliable method to help diagnose and manage kidney disease at the point of care. “Because these reagent strips also measure urine creatinine, we are able to reduce false positive results in concentrated urine samples. Our system also alerts the operator if the urine specimen is too dilute, which helps to reduce false negative results,” said Susan Selgren, senior marketing manager at Bayer. Due to their ease of use and reliability, these strips are found in many primary care physician office settings.

According to the NKF practice guidelines, positive results should be followed with quantitative protein or albumin-to-creatine ratios. Bayer has developed the Microalbumin/Creatinine Cartridge for use on their DCA 2000+ analyzer offering quantitative determination of low concentrations of albumin and creatinine in random urine samples with a single cartridge. This platform also provides CLIA-waived quantitative measurement of hemoglobin A1c from capillary blood within six minutes. According to Selgren, the DCA 2000+ system is primarily found in settings that focus on diabetes management. “This platform provides quantitative serum A1c and urine Albumin-to-Creatinine ratio results that compare very favorably with reference laboratory instruments. The A1c test is waived, and we are working to obtain CLIA-waived status for the Microalbumin/Creatinine test as well, which we feel will expand its application for clinicians at the frontline of patient care.”

Because analysis of urine is used for the diagnosis and management of many disease states, it is likely that the ability to correct for variation in urine concentration will have an impact on the measurement of other analytes as well. And with the availability of this new technology, physicians can look forward to additional tools to help them refine treatment regimens for many diseases at the point of care.

Louise Lazear is a freelance writer based in Charlotte, N.C.

ONC to Establish the Temporary Certification Program for EHR Technology 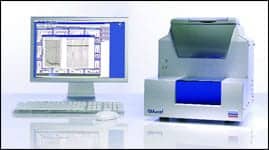