The test uses microarray analysis to conduct a more comprehensive examination of a fetus’s DNA than is possible with the current standard method, karyotyping—a visual analysis of the fetus’s chromosomes. Results were published in the December 6 issue of The New England Journal of Medicine (NEJM).

The prospective, blinded trial involved 4,400 patients at 29 centers nationwide; the data took 4 years to compile. The study involved women with advanced maternal age and those whose fetuses were shown in early screening to be at heightened risk for Down syndrome, to have structural abnormalities (as seen with ultrasound), or to have indications of other problems. Ronald J. Wapner, MD, professor and vice chairman for research at the Department of Obstetrics and Gynecology at CUMC and director of reproductive genetics at NewYork-Presbyterian/Columbia, was principal investigator. This is the first and only study to prospectively compare karyotyping with microarray in a blinded head-to-head trial.

The trial found that microarray analysis, which compares a fetus’s DNA with a normal (control) DNA, performed as well as karyotyping in identifying common aneuploidies (an abnormal number of chromosomes—an extra or missing chromosome causes genetic disorders such as Down syndrome and Edwards syndrome); it also identified additional abnormalities undetected by karyotyping.

Microarray technology: This is a laser scan of the patient DNA to the microarray chip. The intensities of the different color dots indicate the quantity of the DNA. Among fetuses in which a growth or structural anomaly had already been detected with ultrasound, microarray found clinically relevant chromosomal deletions or duplications in one out of 17 cases (6%) that were not observed with karyotyping. In cases sampled for advanced maternal age or positive screening results, microarray analysis picked up an abnormality in one out of every 60 pregnancies (1.7%) that had a normal karyotype.

“Based on our findings, we believe that microarray will and should replace karyotyping as the standard for evaluating chromosomal abnormalities in fetuses,” Wapner says. “These chromosomal micro-deletions and duplications found with microarray are often associated with significant clinical problems.”

As with karyotyping, microarray requires fetal cells obtained via an invasive procedure such as amniocentesis, where fetal cells are taken from the amniotic fluid, or chorionic villus sampling, where cells are taken from the placenta. Parents deciding whether to take these tests must weigh a number of factors, including their individual risk of fetal abnormalities, possible procedure-induced miscarriage, and the consequences of having an affected child. Work is under way to develop a noninvasive test, the same information seen by microarray, using a blood sample taken from the mother but is not yet available.

“We hope that in the future—when microarray can be done non-invasively—every woman who wishes will be offered microarray, so that she can have as complete information as possible about her pregnancy,” said Dr. Wapner.

Second Paper Published in Same Issue of NEJM re: Microarray in Stillbirth
In a second paper published in the same issue of NEJM, about the use of microarray in stillbirth, results showed that microarray produced a clinical relevant result in 87% of 532 cases, which were analyzed with both karyotyping and microarray. In contrast, standard methods for analyzing a stillbirth, which include karyotyping, have been shown in previous research to fail to return information in 25–60% of cases. Click here for more information. 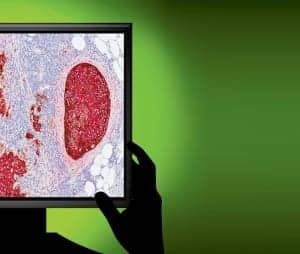