STI Incidence on the Rise 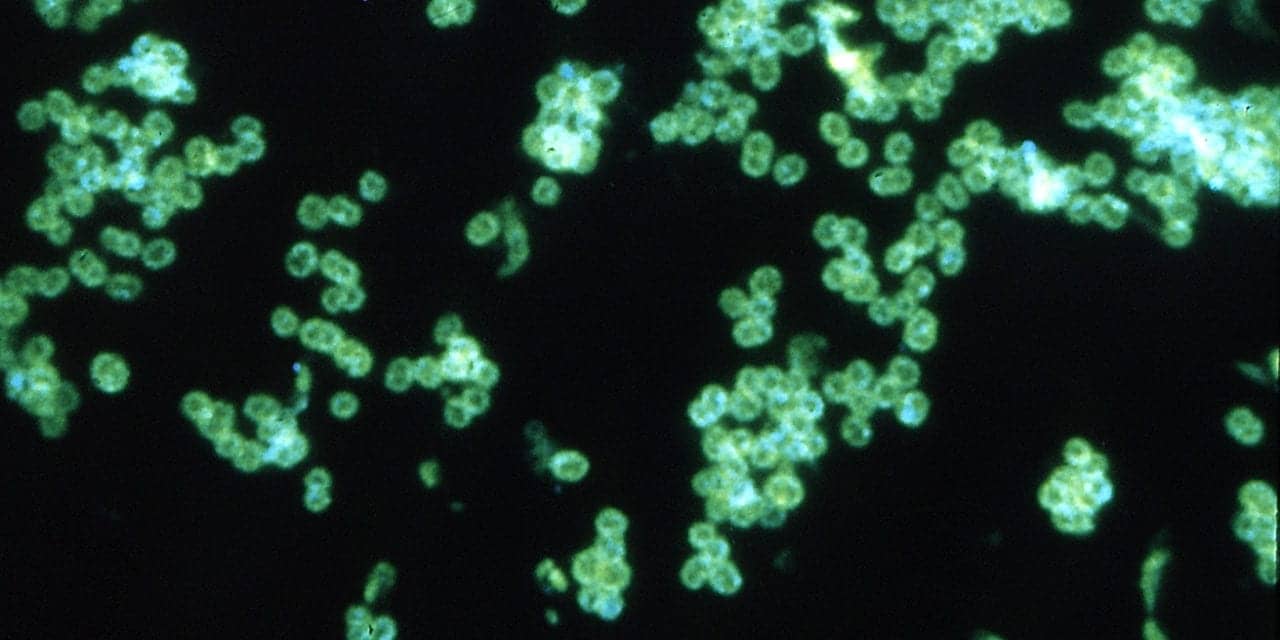 Microorganisms and the infectious diseases they cause have been a threat to mankind’s existence throughout the history of human civilization. Century after century, epidemics have been leaving their marks on the human race, changing the course of human history in their wake. While advances in biomedical science have ensured our survival, the threat of infectious diseases still remains today.

The incidence of sexually transmitted infections (STIs) is at an epidemic level. According to the US Centers for Disease Control and Prevention (CDC), more than 19.7 million new STI cases are diagnosed in the United States each year.1 These include chlamydia, gonorrhea, syphilis, and trichomoniasis, as well as viral infections such as hepatitis B virus (HBV), herpes simplex virus-2 (HSV-2), human immunodeficiency virus (HIV), and human papillomavirus (HPV). CDC estimates the current nationwide prevalence of STIs among both men and women to be more than 110 million cases.1

CDC analyses presented at the biennial National STD Prevention Conference in August 2018 reported alarmingly steep and sustained increases in sexually transmitted diseases (STDs) throughout the United States.2 For 2017, CDC documented nearly 2.3 million cases of chlamydia, gonorrhea, and syphilis combined, exceeding the previous record of 2016 by more than 200,000 cases, and marking the fourth consecutive year of sharp increases in these STDs. From 2013 to 2017, gonorrhea diagnoses increased 67% overall (from 333,004 to 555,608 cases) and nearly doubled among men (from 169,130 to 322,169). The increase in gonorrhea diagnoses among women is also evident for the third year in a row (from 197,499 to 232,587). Chlamydia remains the most common condition reported to CDC. More than 1.7 million cases were diagnosed in 2017, with 45% among females aged 15 to 24.

While youth aged 15 to 24 represent just 24% of the sexually experienced population in the United States, they are disproportionately affected by STIs, accounting for approximately 50% of all new cases. Gender-wise, the annual number of new infections nationwide is close to equal among young women and young men, 49% versus 51%, respectively.

The State of New York has one of the highest rates of chlamydia and syphilis in the country. According to CDC data for 2017, New York ranked 9th, 21st, and 6th among all states for the total number of diagnoses of chlamydia, gonorrhea, and syphilis, respectively.3 Demographically, young people, gay, bisexual, and other men who have sex with men (MSM) have the highest rates of STIs in New York. Chlamydia continued to be the most common reportable STI in New York in 2017 with 116,843 diagnoses, a 7% increase over 2016 and the highest number of diagnoses since chlamydia became reportable in 2000. The highest rates for chlamydia were among females aged 15 to 24. Gonorrhea diagnoses increased 17% in 2017, to 34,111 total reported diagnoses. The rate of increase among males was higher than among females (21% compared to 11%). By age group, rates were highest among males aged 20 to 29, and among females aged 15 to 24.

Viewed together, such disturbing statistics highlight the continuing need for new technologies that can provide rapid, accurate, and cost-effective detection and diagnosis of STIs.

The incidence of STIs at extragenital sites, including the oropharynx and rectum, is also on the rise, especially for chlamydia and gonorrhea (Figure 1). For the first time since 2006, gonorrhea has become more prevalent among men than women. From 2010 to 2014, the number of gonorrhea cases among men increased by 27.9%. This increase is most likely attributed to increased diagnoses among gay, bisexual, and other men who have sex with men (MSM).5,6 A recent review of studies reporting the prevalence of extragenital chlamydia and gonorrhea in women, men who have sex only with women (MSW), and MSM indicated the changing prevalence of extragenital STIs among these groups.7 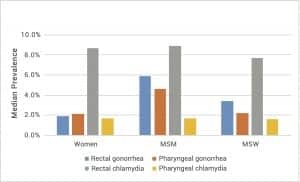 CDC’s STD surveillance network encompasses 42 STD clinics across the United States. Data from the network, based on screening results from 21,994 MSM, indicates the rising prevalence of infection for pharyngeal chlamydia (2.9%), pharyngeal gonorrhea (7.9%), rectal chlamydia (14.1%), and rectal gonorrhea (10.2%) in this population.8

These numbers are in some concordance with the extragenital chlamydia and gonorrhea rates determined as part of the national HIV behavioral surveillance study conducted at MSM-frequented venues in five US cities (Houston, Miami, New York, San Francisco, and Washington, DC). Overall, 13.3% of the 2,075 participants were infected with at least one of the two STDs at one or two anatomic sites. Prevalence of rectal chlamydia (7.3%) was higher than that of rectal gonorrhea (4.5%), whereas prevalence of pharyngeal gonorrhea (4.6%) was higher than that of pharyngeal chlamydia (1.4%).9 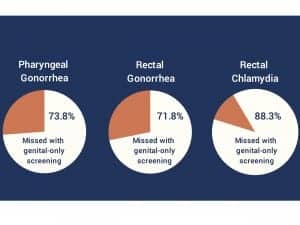 The multiple testing technologies currently available to clinical laboratories for the direct detection of STI pathogens can be divided into two general categories: culture and nonculture. In accord with their capabilities and performance characteristics, not all of the existing methods are recommended for routine diagnostic use.

Microbiological culture methods represent the oldest reference standards in the field, but they are time-consuming, difficult to standardize, and not readily amenable to automation, transport, and storage. Yet it is important for clinical laboratories to maintain their capability to culture both C. trachomatis and N. gonorrhoeae in order to perform a test of cure in suspected cases of treatment failure, to monitor changes in antibiotic susceptibility, and to detect rare infections caused by variant or mutated strains.14

Among the nonculture STI tests available, CDC does not recommend the use of enzyme immunoassays or genetic transformation tests because of their lack of precision. 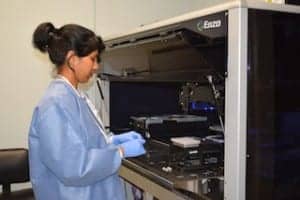 Figure 3. The Enzo Molecular Diagnostics open platform has been developed to automate the workflow for nucleic acid amplification testing at Enzo Clinical Labs.

Enzo Clinical Labs, a subsidiary of Enzo Biochem, Farmingdale, NY, has extensive experience with both FDA-cleared diagnostics and laboratory-developed tests (LDTs) for women’s health targets, including STIs (Figure 3). To meet the rising incidence of such infections in its home state and beyond, Enzo Clinical Labs has identified the need for cost-saving options, including wider availability of LDTs. Before using their LDTs with clinical samples, however, labs must perform diligent in-house validation of their tests to meet the requirements of the Clinical Laboratory Improvement Amendments of 1988 (CLIA) and, in New York State, the standards of the clinical laboratory evaluation program of the New York State Department of Health (NYSDOH).

To increase the availability of extragenital nucleic acid amplification testing services for public health agencies in regions of New York State that are currently underserved, NYSDOH has recently contracted Enzo Clinical Labs to validate its laboratory-developed Ampiprobe CTNGTV PCR assay for use with pharyngeal and rectal specimens.

The Ampiprobe CTNGTV PCR assay is a multiplex nucleic acid amplification test developed by Enzo Life Sciences, another subsidiary of Enzo Biochem, and conditionally approved by NYSDOH’s clinical laboratory evaluation program for detection of C. trachomatis, N. gonorrhoeae, and T. vaginalis DNA in vaginal swab specimens (Figure 4). The assay utilizes Ampiprobe technology, which incorporates the probe method into primer design and enables the use of real-time PCR detection.20 The assay’s use of proprietary fluorescence-labeled and quencher-labeled paired primers allows for real-time detection of PCR product by monitoring the emission intensity of the fluorescent reporter dyes released or, more specifically, quenched, during the amplification process.

Enzo’s validation study has demonstrated the high overall accuracy and precision of the Ampiprobe CTNGTV assay in both pharyngeal and rectal specimen types. A low limit of detection, fast turnaround time, affordability, and ease of use distinguish the Ampiprobe assay from other commercial nucleic acid amplification tests in the infectious disease space.

In the quest to stop the current STI epidemic, it is imperative that healthcare professionals have access to rapid, sensitive, and cost-effective molecular assays utilizing cutting-edge technologies for the detection of C. trachomatis and N. gonorrhoeae in a broad range of specimen types. This need is especially critical in the current climate of cuts in healthcare, decreased reimbursement for laboratory services, and rising operational costs.

Public health authorities and other healthcare professionals are already taking necessary steps to support increased preventive measures and public education about the STI crisis. In addition to such initiatives, the introduction of an innovative, multiplex, low-cost nucleic acid amplification test compatible with urogenitial and extragenital collection devices will also play an important role in helping to identify and treat chlamydia and gonorrhea infections in high-risk and underserved communities, both in New York State and nationwide.

Guideline Backs Interferon-Gamma Release Assay For Assessing Those With HIV