Researchers at Moffitt Cancer Center have developed and tested in mice a synthetic vaccine and found it effective in killing human papillomavirus-derived cancer, a virus linked to cervical cancers among others. The research was published in a recent issue of Cancer Immunology, Immunotherapy.

“Vaccines for cancer can be good alternatives to conventional therapies that result in serious side-effects and are rarely effective against advanced disease,” said Esteban Celis, MD, PhD, senior member and professor in Moffitt’s Immunology Program. “The human papillomavirus, or HPV, is known to cause 99% of cervical cancers and annually causes more than 250,000 deaths worldwide.” In addition, HPV is the causative agent of a large proportion of head and neck and genital cancers.

Although two approved prophylactic vaccines against strains of HPV that cause cervical cancer are now in wide use as a measure to prevent HPV infections, these vaccines cannot be used to treat HPV-induced cancers. Thus, there is a need to develop therapeutic vaccines for HPV-related tumors.

In an effort to find an effective HPV-cancer vaccine that would eliminate existing HPV-induced cancer, Celis and Kelly Barrios-Marrugo, PhD, of the University of South Florida College of Medicine’s Molecular Medicine program, designed a peptide vaccination strategy called TriVax-HPV.

The TriVax vaccine strategy was designed to generate large numbers of cytotoxic T-cells that would seek out the proteins preferentially expressed in the tumors. The HPV16-E6 and E7 proteins function as oncogenic proteins inducing cancer. Thus, according to Celis and Barrios-Marrugo, a vaccine targeting these viral proteins is an “ideal candidate” to create strong immune responses, with the additional benefit of not generating autoimmune-related pathologies.

When they tested their vaccine in mice with HPV16-induced tumors, they found that TriVax containing a small synthetic fragment (peptide) of the E7 protein “induced tumor clearance in 100% of the treated mice” while the unvaccinated mice with HPV-induced tumors had their tumors grow “at a fast rate.”

“Although the magnitude of the T-cell responses achieved with TriVax in mice is impressive,” Barrios-Marrugo said,” we do not know whether similar effects can be accomplished in humans.”

Celis and Barrios-Marrugo point out that current therapies for cervical cancer can be devastating, highly toxic, and associated with a 10% chance of recurrence. Additionally, a significant proportion of women in the Third World will not receive the approved prophylactic vaccine to prevent HPV infection and, thus, will continue at high risk for cervical and other cancers related to HPV.

“We believe that these studies may help to launch more effective and less invasive therapeutic vaccines for HPV-caused malignancies,” concluded the authors.

Their research was supported by National Institutes of Health grants RO1CA136828 and RO1CA157303. 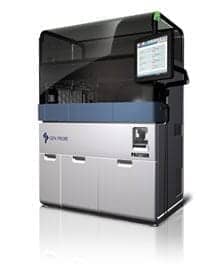